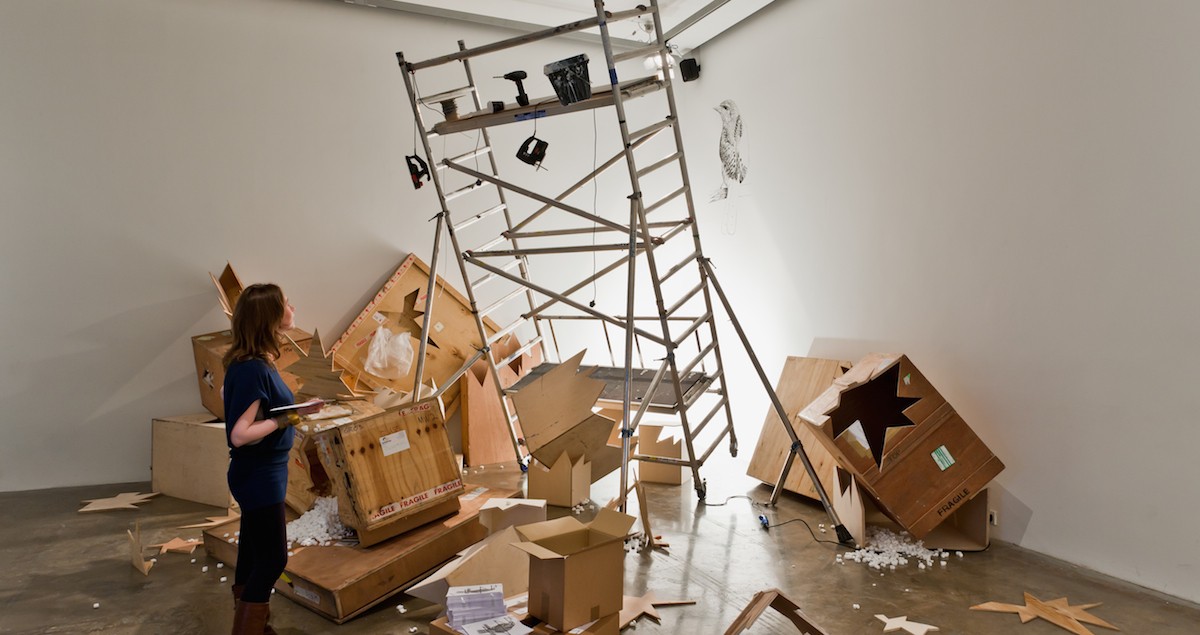 Published in this is tomorrow
Literary critic Paul De Man once described the origins of ironic humour through man’s futile battle with gravity. While tripping and stumbling in public can often be a source of excruciating shame and ridicule, it also gives birth to superior knowledge of one’s own fallibility. In essence: “The man who has fallen is somewhat wiser than the fool who walks around oblivious of the crack in the pavement about to trip him up.”
In February 2011 a disparate group of performers starred in ‘The Last of the Red Wine’, a collaborative sitcom based in the art world that parodied and often scorned ways that artists are depicted in mass entertainment. By the admission of the event’s curatorial statement “it was quite amusing in places and embarrassingly not in others.” It compelled because of its willingness to indulge in moments of spectacular failure: to trip, wobble and occasionally fall inelegantly on its arse.
One year on a selection of the original cast have reassembled in Dublin for a second take. This time they present an exhibition that turns the original premise on its head by inviting artists to consider their own subjectivity rather than their representation as subjects within the media.
Often self-analysis can be a perilous instrument for artists to wield. Paul McCarthy’s recent installation and self-portrait ‘The King’ at Hauser and Wirth elevated the artist to a god-like status, using self-aggrandisement with such a lack of subtlety that all ironic intent seemed to completely evaporate. Thankfully the artists in ‘The Last of the Red Wine: the prequel/ sequel’ consider themselves more clown-like than Christ-like and are able to offer up work that is self-reflexive without being overly self-indulgent.
Bedwyr Williams installation ‘The Jynx’ stages the remains of a tragic mishap that occurred in the final moments of exhibition install. While authoring a wall drawing perched atop of scaffolding, the artist slipped and tumbled to the ground, narrowly avoiding an embarrassing collision with the gallery intern. He had been drawing a bird. In a postscript presented in booklet form at the scene of the accident, Williams speaks to his audience from beyond the grave. “Can you believe that I fell from the scaffolding and died? I didn’t feel like I was flying. I felt like I was falling.” Splitting himself into parallel subjectivities, the artist points his finger at the idiotic rituals of the art world that look so superfluous in the face of his own mortality.
Kim Noble’s video projection ‘It’s not the despair, Laura. I can take the despair. It’s the hope I can’t stand. Brian Stimpson, Clockwise,’ takes its title from a quotation uttered by one of the great masters of comedic self-ridicule John Cleese, in a film about a middle-aged male whose life is beset by frequent disasters. The work depicts a plaster-scene caricature of the artist clad in superhero costume, hurtling across a dense, grey London skyline. An amusing fantasy but intentionally unconvincing: it quickly becomes apparent that the figure is attached to a thick length of bent wire and is being recorded using the backdrop motion effect offered by the window of a moving bus. These on the cheap special effects coupled with the grandiosity of the orchestral soundtrack suggest that this work is an attempt to send up cinematic convention and the role of the heroic male protagonist. Yet projected strangely close the floor, the work is characterised by a bashful reluctance that feels less about flying and more about being eternally tethered to the ground.
A major theme that runs across the show is how imposed hierarchies of the art world tend to infringe upon an individual artist’s sense of self. Doug Fishbone’s two-minute film ‘Its Not You, Its Me-Promo’ sees the artist dressed as businessman-come-gangster pitching an appeal to camera for funding for his new film; often using linguistic turns of phrase that might be more closely associated with the marketing industry than the constructs of visual art. Hayley Newman’s video projection ‘My Studio’ casts the artist as haphazard hostess welcoming visitors to a series of roving locations (including her own bed) that double as artists work-space. In both cases the act of selling a persona and a practice takes on an absurdist and often-pathetic turn.
Perhaps the most enjoyable element of “The Last of the Red Wine: the prequal/ sequal’ for someone who has witnessed both episodes it its commitment to gently undermining the conventions of visual art presentation. Rejecting the need for interpretation panels or floor plans, the exhibition offers context via Sally O’Reilly’s ‘Tombstones’ installed at the threshold of the gallery, whispering the title of each of the artworks. Inside the gallery short blasts of sound effects from the first episode offer a strange overlaying of the two events. How much of this self-reflexive commentary would be appreciated by an average punter is difficult to predict, but at the very least this exhibition is well worth a visit if you want to see some artwork that is seriously and quite wonderfully absurd.