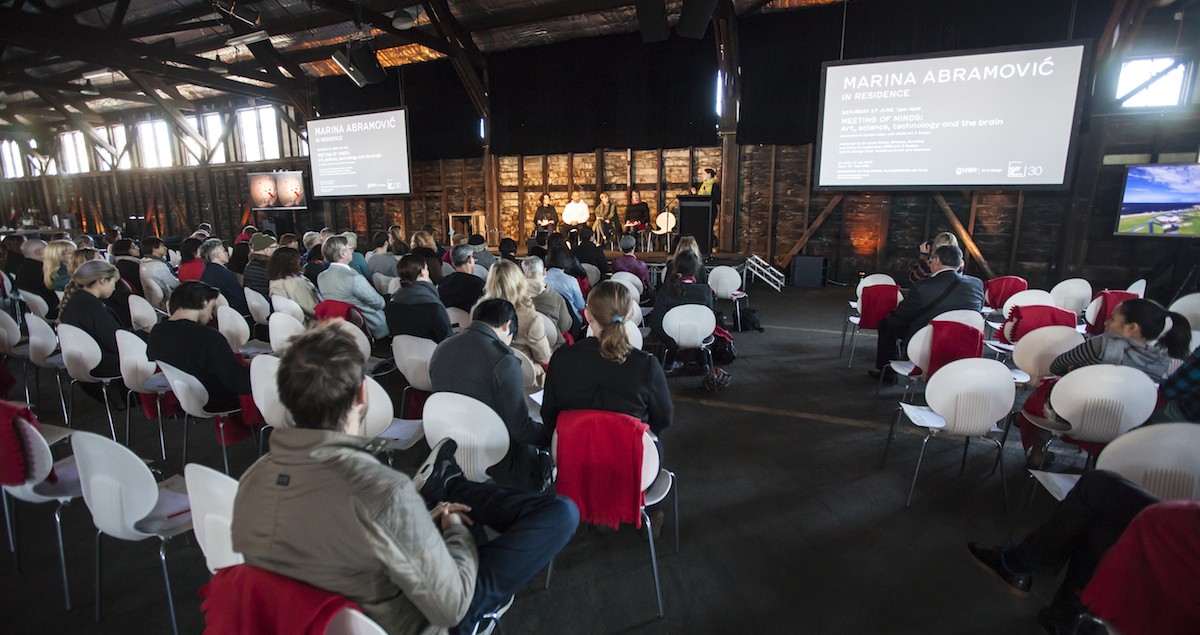 I’ve been back in Sydney for a week and it seems I have arrived at the same time as a certain Marina Abramović. No prizes for guessing who the art world is more excited about! While I’m not quite at Marina levels of fame here yet, I was part of a team of amazing UNSW researchers who drew a pretty impressive crowd down at Marina Towers (Pier 2/3 Walsh Bay) on Saturday afternoon. Our event Meeting of Minds responded to Marina Abramović’s interest in the combination of art and science and the exploration of the brain.

Personal highlights for me were meeting my fellow PhD Pia Van Gelder and listening to Professor Anna Munster argue passionately and succinctly against the gradual encroachment of ‘neurobollocks’ into the cultural mindset.

At her keynote lecture last night, it was also completely apparent to me that Marina Abramović’s increasing interest in mindfulness (she does not use this word explicitly, but it is so present as a concept) makes her work an unavoidable reference point for my own research into the relationship between art and mental health. While the Group Therapy exhibition seeks to create an experience that produces a feeling of overwhelm and saturation to explore the relationship between mental health and the digital world, Marina Abramović in Residence seeks to evoke in the viewer absolute calm and serenity. A major aim of my curatorial research is to ‘encourage viewers to reflect on their own mental health in the gallery space’ and I think Marina Abramović’s exhibition, which engages audiences in tasks such as deep breathing and staring deeply into another person’s eyes demonstrates that we might be on a similar mission!

And just for kicks here is that great video of Lady Gaga doing the Marina method so you can all see what I mean about the references to mindfulness.

One thought on “Magic, Madness and Marina Abramović”