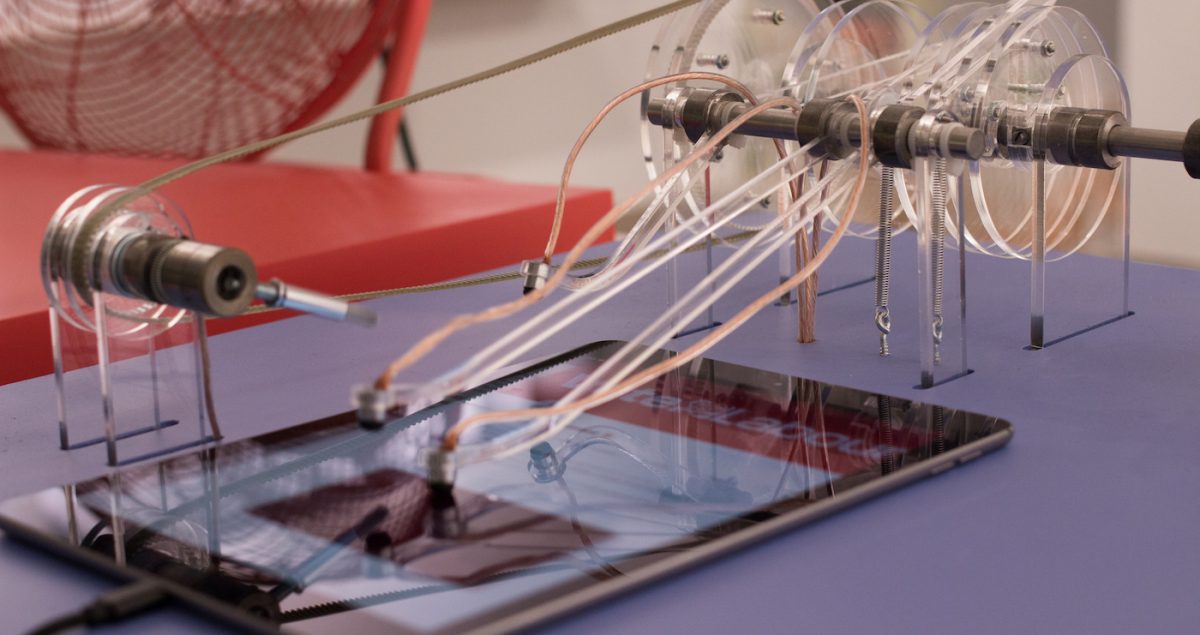 Congratulations to Cognitive Sensations who recently secured money from Arts Council England to develop their fantastic art-science research resource. I wrote this article for them in May 2019.

his customer engagement manual Hooked: How to build habit-forming products, Nir Eyal describes the various triggers that interface designers deploy to render online environments more habit-forming. Icons placed on mobile home screens highlight unanswered messages and act as a constant reminder of digital loops awaiting closure. Red circles in the top left-hand corner of each icon count outstanding actions still to be taken—producing a subtle but continuous psychological itch. Meanwhile, social networking sites embed themselves at the of a user’s emotional life. Eyal suggests that Instagram exploits the quiet anxiety that occurs when users fear a special moment will be lost forever. This need to document and preserve is supported within the app by filters and visual icons that make the poorest quality images more attractive. Eyal suggests that ‘users who find a product that alleviates their pain will form strong, positive associations with the product over time… these bonds cement into a habit as users turn to your product when experiencing certain internal triggers’ [1]. Similar tendencies have also been observed by anthropologist Natasha Dow-Schüll in her studies of digitally enhanced machine gambling interfaces, where designers work with , light, animation, sound space to create experiences that yield maximum gambling revenue by keeping players on for as long as possible. Schüll describes the intention of one machine gambling company to create interfaces that function as a ‘personal theatre’ describing technology using aesthetic referents [2]

In a consumer driven society, digital engagements are constructed with sensory stimulation and consequential increases in ‘time on device’ at the core of their design. The psychological impact of prolonged screen-time divides psychologists and clinical researchers [3], as does the validity of emerging diagnostic terminology such as ‘internet addiction’ [4]. Rather than rehearsing the two sides of this argument again here, this short essay is concerned with probing the often overlooked role of aesthetics in the creation of digital habits, and, with the potential of art to illuminate the psychological, social and sensory dimensions of habit-forming digital technologies. My application of the term aesthetic is prompted in part by its deployment in user experience design, where it describes how visual pleasure can entice a user to engage with a digital interface for longer [5]. More importantly, I also want to think through digital aesthetics as a ‘sensory knowing of the world’ [6] that can shape experience in such a way that it generates reflection on the role of the digital in everyday life. This approach mirrors investigations by art theorists such as Anna Munster, who has argued that contemporary artistic practices present one of the most powerful ways to come to grips with networked culture [6]. Using case study artworks by YoHa and Steve Lambert among others, she argues that art can create ‘alternative social-political spaces in which knowledge can be generated collectively rather than merely (re)discovered and accumulated proprietarily’ [6]. In other words, aesthetic experience can prompt reflection on digital interfaces in a way that is critically and socially motivated. Crucially, Munster also shows how digital experiences involve affect, ‘moving dynamic qualities of experience’ that are different to pure emotion. Borrowing from psychologist Daniel Stern, she uses the term ‘vitality affects’ to describe a circulation of feeling that takes place within the tempo of daily living; ‘as we breath, fall asleep…wake up’ and engage in digital networks [6]. This subtle, continuous movement of affect can perhaps be thought of in relation to the barely perceptible discomforts that Eyal uses as motivators for action in his book. The feelings that Eyal’s design aesthetics seek to harvest are ‘below the perceptibility of consciousness’ and constitute ‘tiny stressors’ that manipulate without attracting too greater portion of our conscious attention; ‘feelings of boredom, loneliness, frustration, confusion and indecisiveness often instigate a slight pain or irritation and prompt an almost instantaneous and often mindless action to quell the negative sensation’ [1]. This digital affect becomes an ordinary part of our daily experience.

In a cultural moment where interface design toys with and drives latent emotions and affects, I argue that artists, designers and other aesthetic activists should be part of any effort that seeks to understand the psychological impacts of living in a digital culture. This is not to suggest that digital art and interface design should be considered as the same thing or that digital artists might be directly employed to re-design user interfaces. What I would like to suggest is that aesthetic experience produces opportunities for questioning and working through the ethical, experiential and psychological consequences of living in a digital world where emotions are cultivated for profit. From inside aesthetic encounters we can begin to fully comprehend the emotional complexity at work in the interplay between visual and sensory stimulus, affect and digital devices.

Artists’ responses to practices of digital manipulation can be observed in several recent exhibitions and artworks that have made links between affect, digital culture and interface design. The exhibition and research project Are We All Addicts Now? led by Katriona Beales was the first to explore and critique behavioural design devices such as those advocated by Eyal. Beales reflects her own experiences of internet use as being ‘trance-like’ and ‘seductive,’ producing sculptures and installations that recreate these ambiguous psychological states for the viewer. In the exhibition Hooked: When Want Becomes Need curated by Hannah Redler-Hawes for Science Gallery London, works by Jonah Brucker-Cohen and Benjamin Grosser, Katriona Beales and Yole Quintero all worked with the slow creeping discomforts produced by contemporary interface design. Jonah Brucker-Cohen and Benjamin Grosser’s work Please Don’t Like This (2015) is a starkly designed web page with a throbbing red ‘like’ button at its centre. ‘LIKE THIS!’ the heading cajoles, while a ‘hit counter’ keeps track of the number of people who have already succumbed. Certainly, the work does not invite the viewer into a transformative, high emotion experience in the sense that we might associate with traditional aesthetic theories devised by Kant, for example. Instead, what is produced in the viewer is a much more mundane oscillation between temptation and indifference, an affect that niggles under the skin just enough for the viewer to act to reduce the discomfort before moving on to scratch the next psychological itch. Please Don’t Like This reflects the particular aesthetic work often associated with artists in a ‘post-digital’ moment; it draws attention to the visual tropes and affective indifferences of late capitalism with the intent of critiquing them. For curator Christiane Paul, a post-digital aesthetic is about highlighting ‘the embeddedness of the digital in the objects, images and structures we encounter on a daily basis and the way we understand ourselves in relation to them’[7] In encounters with this work, the viewer can perhaps sense more acutely the emotional mechanisms at play in day-to-day digital experience, as art becomes a device for drawing attention to digital affects that often remain hidden from awareness.

A more directly activist strategy is proposed by Stephanie Kneissl and Max Lackner’s artwork Stop the Algorithm (2017), which was recently exhibited as part of All I Know is What’s on the Internet curated by Katrina Sluis for The Photographer’s Gallery. The work is a response to the way that algorithms shape how people engage with information online. Data calculations made behind the scenes of social platforms increasingly determine what will be visible in user timelines. Multiple likes, comments and shares push ‘positive’ content to the top of a feed, while non sensationalist or critical content can disappear if it does not receive a flurry of interactions within the first ten minutes of posting. Taina Bucher has suggested this mechanism compels users who post regularly to obsessively ‘attend to their profiles in the hopes of not being ignored’ [8], creating anxiety that encourages habitual behaviour. Kneissl and Lackner’s work comprises of delicately crafted kinetic sculptures that scroll through Instagram, liking content at random and subverting the workings of that algorithm. The work highlights ‘infinite scroll,’ one of the techniques identified by Eyal as ‘interaction design’s answer to our penchant for endlessly searching for novelty’ [9]. Instagram’s feed is designed so that users scan information without ever reaching an ‘end’. As Kneissl and Lackner’s machines constantly push through content using this ‘infinite scroll’ facility, the viewer might reflect on ways that the design of online space facilitates a bottomless and futile quest to numb anxious affects.

As aesthetic forms continue to shape affective engagements with interfaces in the ways that I have demonstrated above, I argue that the role of aesthetic and arts-based knowledge will become increasingly important for understanding the psychological impact of living in a digital culture. My claim is motivated in part by a feeling that established clinical and sociological approaches continue to fall short in accounting for the cultural, technological and design mechanisms that shape contemporary psychological distress. While art is not a panacea, presented in ways that encourage broad engagement and reflection, it may help to foster increasing understanding of capitalism’s use of design and aesthetics to influence how we work, shop and build relationships in increasingly pervasive digital spaces.

The ideas contained within it grow out of the research project Are We All Addicts Now? in collaboration with Katriona Beales, Fiona MacDonald and Henrietta Bowden-Jones.