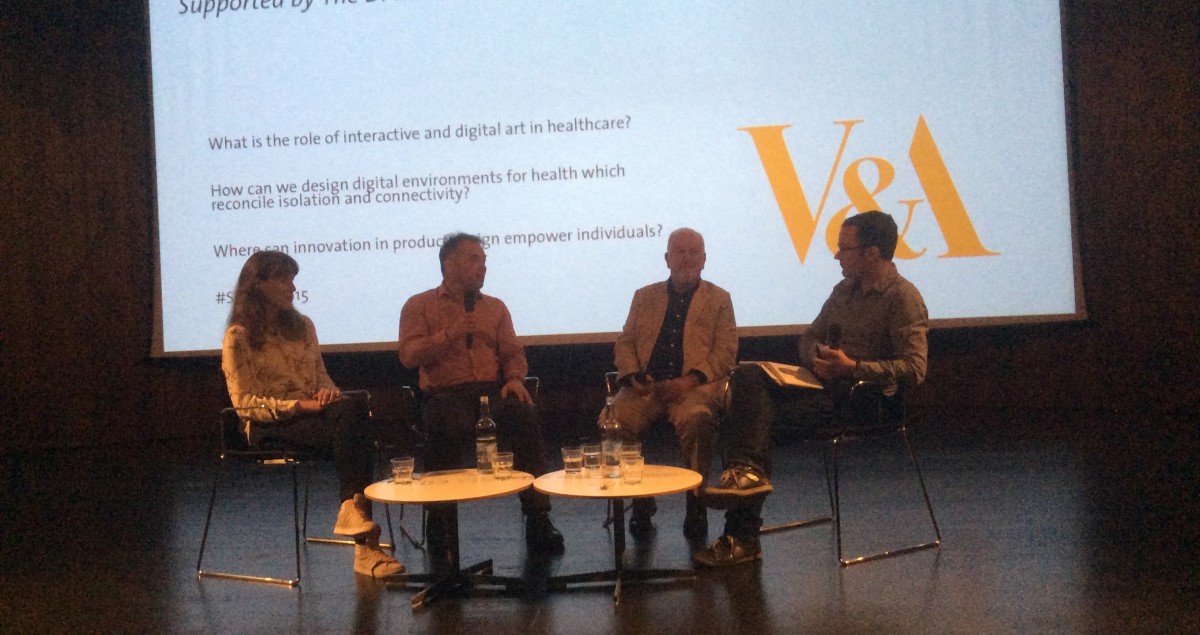 I was nervous about speaking at The Sackler Conference: Art Design and New Technology for Health. Mel Lenz and her team at The V&A had done a sterling job of selecting some of the most exciting folks working in this field, but I couldn’t help but feel that I was perhaps a slight anomaly in my panel. While most arts and health projects are formed to deliver a specific heath outcome for a target group, my work as a curator emphasizes changing cultural perceptions of health and illness; and this process can be hard to quantify and evidence. Would my work appear esoteric among a field of practitioners who are so skilled at producing closely defined health outcomes for audience groups? How would my own work relate to the key themes that would emerge during the day?

As it happens the programme was rich and varied and my presentation got a fantastic response. I’ve picked two of the themes that (from my own perspective) were the most interesting to emerge from the day and will try to summarize each. This process is of course entirely subjective!

Evidencing the value of arts and health work.

This issue was emphasized from the beginning of panel one, with Trystan Hawkins and Christina Peumalu from Chelsea and Westminster Health Charity stating their interest in proving the economic impact of the programme they run in Chelsea and Westminster Hospital. For quite obvious reasons this is the kind of data that really galvanizes when it comes to highlighting the value of the work they they do, especially when making the case to clinicians and commissioners. On the same panel I explained how I am am using The Visual Matrix as a method to evidence cultural and psychological attitudes toward mental health issues as they arise in response to the exhibitions that I curate.

In the second panel a fantastic presentation from Denis Roche and Shaun McCann ended with a very robust summary of evaluation data from a randomized control trial supporting the capacity of their Openwindow project to reduce levels of anxiety, depression and stress in patients undergoing stem cell transplantation for a hematological malignancy. Basically this project provides a projector and sound system to patients in isolation and allows them to view video art curated by Denis, as well as photos uploaded by family and friends, creating an ‘open window’ to the outside world. The trial produced evidence of ‘significantly reduced levels’ of anxiety and depression in patients, but Shaun McCann (Profession Emeritus of Haematology and Academic Medicine at St James’s Hospital Dublin) stressed that this kind of robust quantitive data is very rare in the arts and health sector, with many trials not including significant enough numbers of patients for the data to be clinically adequate.

Finally Sarah Kettley from Nottingham Trent University raised several important issues about the value of work produced during participatory workshops in a health context. Her project An Internet of Soft Things takes a person centered approach to creating smart textiles projects with people with mental health issues. Basically this means that in a series of workshops, participants make objects and artworks out of textiles and electronics. However the value of the project according to Sarah, is in the significance of the process to the participants rather than the aesthetic innovation of the objects themselves, a concept that I think can be difficult in a research context where there is an imperative to innovate on all fronts. Coupled with the fact that the research team felt photography would not be an appropriate method to document the workshops (it can be intrusive), and the fact that the research team did not set out to ‘solve’ a specific health problem, Sarah’s presentation outlined many of the ways that evidencing the value of her work had proven to be a frustrating process.

Data and tech; recording the past and predicting the future.

I was looking forward to Maria Blyzinsky’s talk about her curation of the exhibition Health, Tech and You at the Design Museum earlier this year. This was an exhibition which brought together 20 new personal health technology devices to explore growing trends in mobile health apps and data generation. Apps were divided into six different categories and included examples such as Flowy (also featured in the Group Therapy exhibition) an app which offers breathing retaining to help manage panic attacks; and Sleepio an app that helps you collect sleep data as part of a sleep improvement programme. From a curatorial perspective Maria mentioned how hard it had been to document the design process of these digital objects, since many tech innovators no longer make sketches on the back of an envelope but produce ephemeral digital sketches that are not retained – a point which I think has fascinating implications for curating health design. In terms of the digital future of these health products an audience member questioned whether the consequences of gathering medical data and so called ‘patient empowerment’ might in fact lead to hypochondria or worry if users are not properly trained to interpret the data. The answer from the panel seemed to be that health data accumulation is here to stay and that patients are likely to become more literate in data interpretation as the technology proliferates.

Bethan Hughes from the Wellcome Trust gave a very insightful presentation about the way her organization views the prospect of funding health apps and digital technologies. Her key message about Wellcome Trust’s current position on this type of work is that there is still a real lack of knowledge about what it means to produce and track so much health data. I thought this was a really important point to emphasize about questioning the longitudinal impact of these health technologies. In the future what are we going to do with all of this health data we are generating? Will it really be as useful as we think?

Other key points to take away

Thanks to Clive Parkinson for being a wonderful facilitator of panel one, where he made the crucial point that putting art in hospitals exposes it to people from lower socio-economic groups who may not go to galleries.

During panel two Shaun McCann suggested that one of the biggest obstacles faced by the arts and health sector is it’s tendency to ‘peach to the converted’. This was demonstrated rather powerfully when Clive Parkinson asked clinical staff in the audience to raise there hand and only a handful of people did so. The vast majority of attendees were arts and museum practitioners.

The day was documented with a wonderful set of drawings from Ruby Taylor. I’m chuffed with the illustration of my talk that she created!

One thought on “The Sackler Conference: Art Design and New Technology for Health”