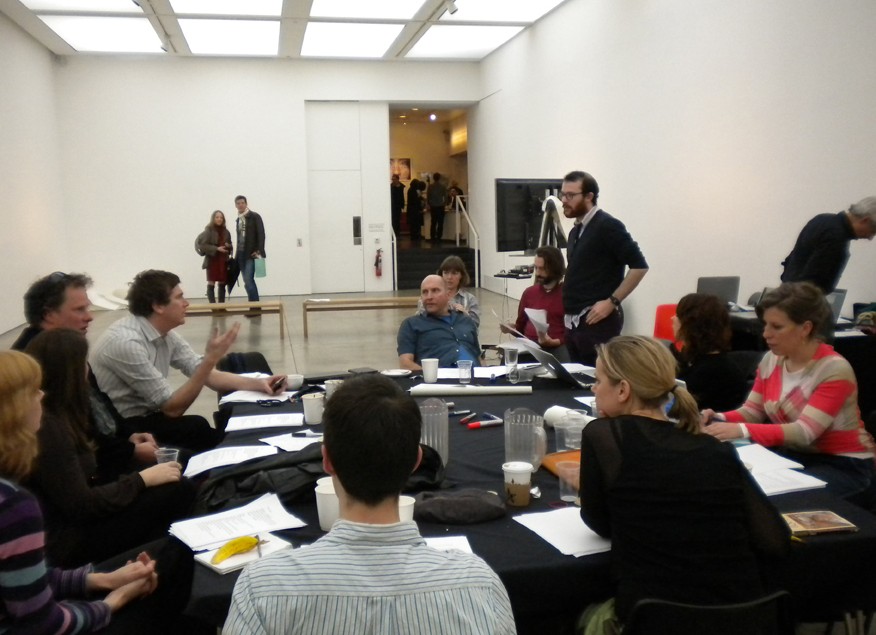 There is a character in Last of the Red Wine, who embodies many of the popular clichés that you might associate with ‘Performance Art.’ Whisper (played by artist Hayley Newman) is constantly involved in the execution of ostentatious projects such as ventriloquising rubbish or touching everything that she sees. Earnest and deliberately obscure, Whisper plays on performance art’s apparent rejection of the notion of performer as entertainer and instead caricatures an individual grappling with more convoluted systems of artistic representation. The result is charming and hilarious, yet also surprising within the context of a project that was pitched as “the art world’s attempt to represent itself more accurately in mainstream entertainment.”

Last of the Red Wine was the sixth of the ICA’s highly successful Live Weekends and was conceived and produced by writer Sally O’Reilly in association with comedy coach Chris Head and a large group of artists, actors, comedians and writers. Evolved from scratch within the space of a week, the project carried a tantalising degree of risk in its alchemising of skills, experiences and no doubt egos, from across disciplines. The programme included five days of writing workshops and performances that were visible to the public, accompanied by a film programme, symposium and an omnibus performance that played host to a lively, sell-out crowd.

From the outset, the symposium set the context perhaps more forcefully than its producers may have intended. The portrayal of artists within mainstream media (including an hilarious show reel of characters from soap operas and sit-coms) stimulated heated debate, but did little to interrogate the rich territory of how meaning is created through representation, or why the language of the televisual is so enduringly pervasive within our culture. Historically, seminal artists such as Nam June Paik and Joseph Beuys have attempted to override dominant cultural codes, by making their own interventionist broadcasts on television. A nod in this direction may have provided a riposte to the simplistic portrayal of the stereotypical artist, which so dominated the conversation. 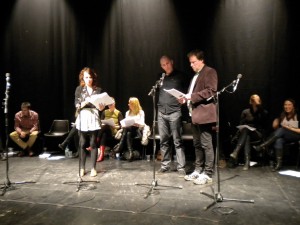 Last of the Red Wine performance at the ICA

By Sunday evening the buzz around the final performance was palpable and as a piece of entertainment it did not disappoint. Often though, it fell to the artists in the cast to instigate minor subversions of the otherwise conventional narrative. Artist and comedian Kim Noble abandoned dialogical convention and instead described his character’s stage directions, in an attempt to expose the inner workings of the script. “Shirley exits with a huge sense of foreboding, possible choral flourish to hammer this point home.” Visual artist and performer Bedwyr Williams digressed from the plot into a reverie of weird satire; “a really bad artist is like a warthog that smashes its way through your patio door and comes all over your scalextric…” With this he did more to poke fun at the grandiosity of art making than any of the more elaborate characters created by the rest of the cast.

At times these moments of deviation put me in mind of comedian Chris Morris’s show Blue Jam, which played in the early hours of the morning on Radio One during the late nineties. Blue Jam was an utterly compelling show, but there were reasons why it was relegated to the early morning time slot; its subversive unravelling of radio convention would have been just too unappealing for a prime time audience.

In a recent sketch, stand-up comedian Simon Munnery ridiculed the proposition that “comedy can never be modern art” by asserting that all artistic disciplines must ultimately overlap. While this may be true, a genuinely hybrid work can be very hard to achieve, particularly when dealing with such radically diverse contexts as art galleries and televisions. For this reason, Last of the Red Wine constituted one of the bravest, most bonkers and fascinating exercises in art-making that I have witnessed for a long time. I am already hoping that there will be a second series.