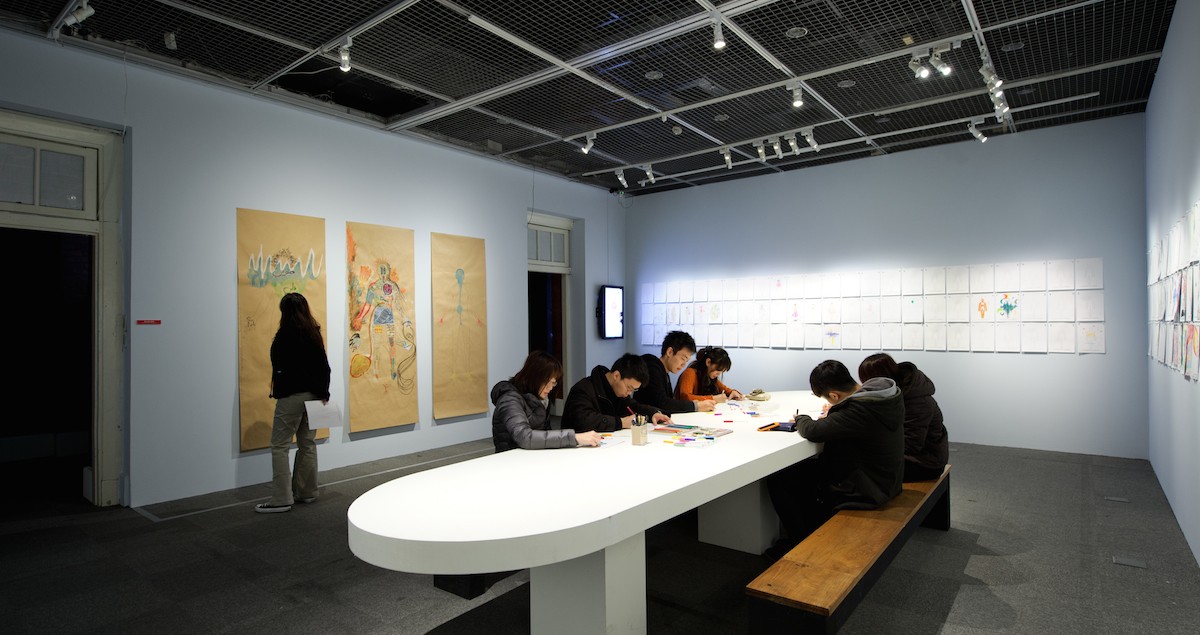 I would like to invite you to be part of an innovative evaluation of the Group Therapy exhibition at FACT (Foundation for Art and Creative Technology). This session will seek to capture the complex emotions created by an exhibition about mental health using The Visual Matrix, a new technique in arts evaluation. Afterwards participants will have the opportunity to meet Lynn Froggett, the psychosocial researcher who created the matrix. This session would suit anyone with an interest in arts and health or innovative forms of arts evaluation.

My first experience of The Visual Matrix took place while working with Jill Bennett, Lynn Froggett and my supervisor Lizzie Muller on a bid for research funding in 2014. Lynn had been invited to UNSW Art and Design on account of the international recognition she was receiving for her psychosocial research methods that sought to mitigate the recognised shortcomings of arts evaluation. As the pressure on the arts to justify its existence has intensified in recent years, there has been a tendency to support social science approaches such as surveys and focus groups as the most effective means of demonstrating audience engagement. This has led commissioners and funders to overlook the emotional and affect based impacts of artist works, as was highlighted in a recent report by Arts Council England:

‘public bodies (for example, health commissioners) have favoured quantitative evidence, although this may not be best suited to showing the more personal impacts of arts and culture’ (Blackburn, Harris et al. 2014)

One of my key ambitions for the Group Therapy exhibition (as stated in my early writings in the exhibition proposal) was to ‘encourage viewers to reflect on their own mental health while in the gallery space’ (Bartlett 2014). So a key question that has defined my approach to evaluating Group Therapy has been: how do I measure the extent to which this process of reflection has taken place?

For me it is imperative that evaluation of a project dealing with art and mental health accounts for the complex emotions that viewers might experience in response to this sensitive subject. I feel that The Visual Matrix has potential as a research method for capturing the personal and emotive audience response that is so crucial for understanding the value of arts and health projects.

The visual matrix, Lynn argues, is able to draw out aesthetic and emotive dimensions that are often missed by  traditional approaches to audience feedback. Her study AHRC funded study Public Art and Local Civic Engagement created a direct comparison between focus groups (one of the social science methods used commonly to gauge audience response to artworks) and the visual matrix. Both were used to interpret audience feedback on two public art projects that arrived in the British seaside town of Ilfracombe at similar times. The report concluded that while focus groups tended to produce audience feedback on the works that expressed instrumental concerns such as economical benefit, the visual matrix gathered feedback that was image led and impressionistic:

‘The matrix enables expression of things that are ‘beneath the surface’ and difficult to express (unrecognized or unspoken ideas and emotions).’ (Froggett, Manley et al. 2012)

In spite of it’s complicated name, the visual matrix is a simple process in which participants are asked to free associate their image based impressions, thoughts and feelings in response to an artwork or issue. The activity is guided as needed by a facilitator, who gently steers the participants away from analytical comments by interjecting with their own image-based responses. Participants are seated in a bespoke configuration to stop them making too much eye contact and to focus them on their own internal processes and experiences. The participants are not there to answer a specific question like they might during a focus group, but rather to bring to mind visual and emotive associations that the exhibition creates for them. The technique was evolved from psychoanalytic thinking about how to create a safe and contained space for open discussion of beneath the surface emotions.

I am going to use the visual matrix to evaluate the Group Therapy exhibition, during a specially organized session on 9th March at FACT. Group Therapy is FACT’s new exhibition that I have co-curated with Mike Stubbs, which examines the relationships between society, technology and mental health.  I am collecting information about audience experience in order to inform the first section of my PhD.

My hope for the session is that I can begin to gather some responses from the group that capture the emotions, associations and visual images that were prompted by the artworks in the exhibition.

We will run the evaluation on Tuesday 10th March 10am-12.30pm At FACT Wood Street, Liverpool. We expect approximately 12 participants. You will be asked to spend the first 30 minutes viewing the Group Therapy exhibition. The evaluation session will last around 45 mins, after which there will be a 5 minute tea break and a further group discussion for around an hour. The session will be recorded, but your participation will be made anonymous in all research results.

At 1pm you will have the opportunity to hear Lynn Froggett speak further about the research method.

If you would like to join us, or have further questions, please email Vanessa Bartlett info@vanessabartlett.com

This research has received ethics approval (approval no. 14 177) from HREA Panel B at UNSW.’

The Felt Sense Project: a psychotherapy based evaluation @ University of Sydney

2 thoughts on “Understanding the value of arts and health: The Visual Matrix”