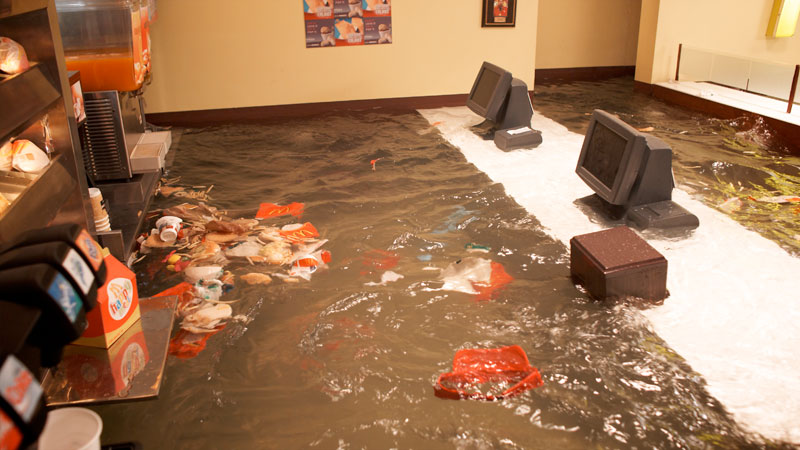 My first encounter with Superflex was during a period of research for an undergraduate essay titled Can Art Change the World? This was my first experience of socially engaged art practice and as such, it planted the seeds of an ongoing fascination with socio-political art production.

While there are a multitude of artists projects in existence that aspire to instigate social transition, Superflex appeared uniquely successful with their invention of a series of ‘tools’ to empower users to alleviate problems in their community or independently influence their environmental context. See projects such as Supergas

I was immediately curious then, when I heard about Flooded McDonalds, a Superflex project that employed cinematic language to communicate its social message and marked a significant departure from earlier work. Set in a specially constructed facsimile of an early nineties McDonalds, the film shows water seeping into the set from an unseen source, filling the space, lifting and displacing empty food packaging and scraps of hamburger and eventually upending a sinister Ronald McDonald statue. Occasionally plunging underwater, the camera works cinematically to build tension, with whirling sub waterline sound effects creating unease and a sense of inevitable disaster. This is a film not only about subverting a global corporate institution, but also about the inevitability of climate change and society’s increasing powerlessness against the forces of nature, that are likely to destroy our homes and industries as we continue to consume at an unsustainable rate.

Yet while Suplerflex’s earlier projects also heeded this very serious warning, they also proposed solutions, a quality that is undoubtedly missing from Flooded McDonalds. The cinematic prowess and artful production of this film induces an effecting message, but with in an era where our media is saturated by warnings of imminent disaster caused by climatic change (see al Gore’s An Inconvenient Truth etc), I may need some extra convincing that the energy consumed during the production and presentation of this work in the gallery hasn’t done more to exacerbate rather than alleviate impending environmental disaster. While I find both flooded McDonalds and Burning Car to be beautiful and powerful pieces of imagery, I can’t help but look forward to a return to Superflex’s engaged and practical approach.