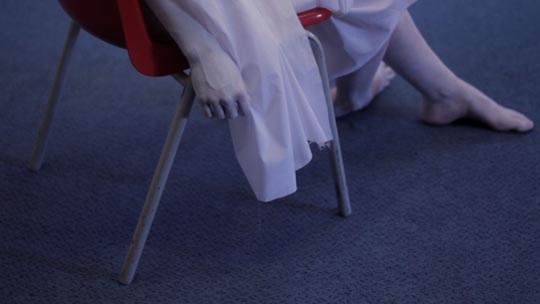 I can’t say enough good words about the new film screening at Space in Between Gallery. I’ve written an essay to accompany it that you can download here theocellitext.

The Ocelli – a film by Ben Jeans Houghton & Matthew De Kersaint Giraudeau – is a study of perception, vision and myth which charts the development of a 2000 year-old mushroom from dormant state to sentient being alongside an investigation of human vision and perception. Combining archive 16mm footage from the British Museum of Optometry, acted film, specific visual effects, music and narration ARKA Group’s Ocelli is a complex web of ideas and visual materials.

The film will be shown on Saturdays, on the hour between 1-5pm. The gallery is open from 12pm and the last screening will start at 5pm. (The film can also be seen by appointment – please contact info@spaceinbetween.co.uk to make an appointment.) Exhibition runs 03/03/12 – 07/04/12