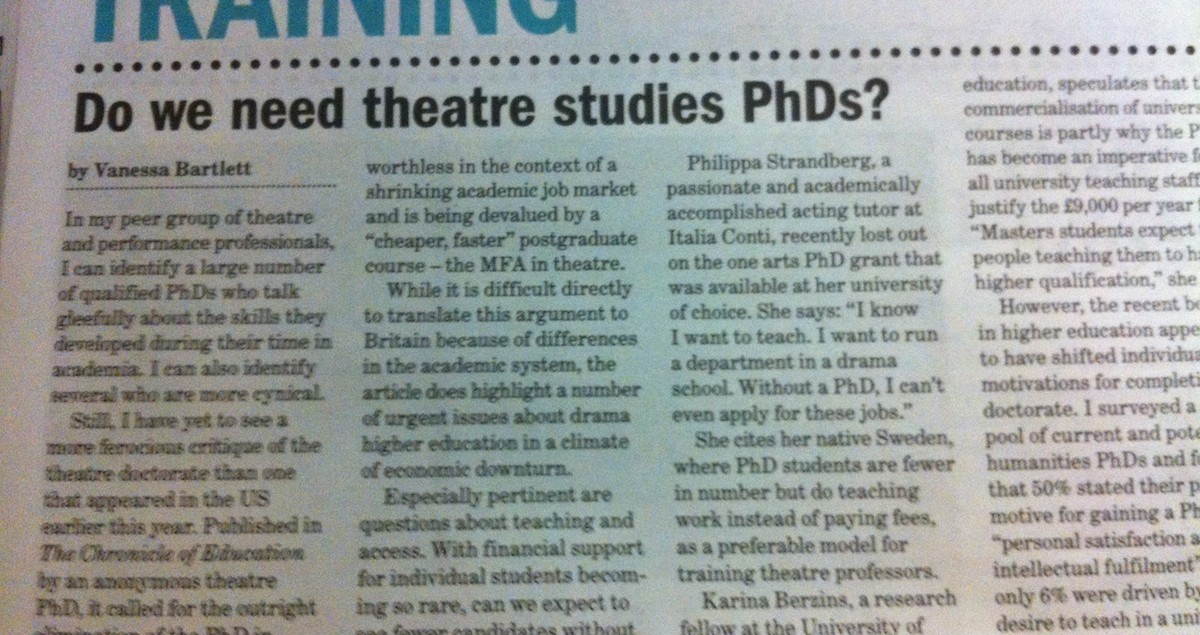 My article on PhDs in Theatre Studies was published in The Stage on 9th May. Given that it happened a few days before my birthday I manged to completely miss it! If anyone has any belated comments please feel free to add them here.

Do we need Theatre Studies PhDs?

In my peer group of theatre and performance professionals, I can identify a large number of qualified PhDs who talk gleefully about the skills they developed during their time in academia. I can also identify several who are more cynical. Still, I’ve yet to see a more ferocious critique of the Theatre Doctorate than one that appeared in America earlier this year. Published in The Chronicle of Education by an anonymous Theatre PhD, it called for the outright elimination of the PhD in Drama. The author suggested his qualification is becoming worthless in the context of a shrinking academic job market and is being devalued by a “cheaper, faster” postgraduate course: the MFA in Theatre.

While its difficult to directly translate this argument to Britain because of differences in the academic system, the article does highlight a number of urgent issues about drama higher education in a climate of economic downturn. Especially pertinent are questions around teaching and access; with financial support for individual students becoming so rare, are we likely to see fewer candidates without parental support being able to complete their PhD?

Philippa Strandberg a passionate and academically accomplished acting tutor at Italia Conti, recently lost out on the one arts PhD grant that was available in her university of choice. She says “I know I want to teach, I want to run a department in a drama school. Without a PhD I can’t even apply for these jobs.” She sites her native Sweden, where PhD students are less in number but do teaching work instead of paying fees, as a preferable model for training theatre professors.

Karina Berzins a Research Fellow at The University of East London and an expert in widening participation in education, speculates that the commercialisation of university courses is one of the reasons why the PhD has become an imperative for all university teaching staff. In order to justify the £9,000 per year fees: “masters students expect the people teaching them to have a higher qualification.” She emphasises that the traditional purpose of a PhD was always to prepare candidates for academic professorship.

However, the recent boom in higher education appears to have shifted individual motivations for completing a doctorate. I surveyed a small pool of current and potential humanities PhDs and found that 50% stated their primary motive for gaining a PhD was ‘personal satisfaction and intellectual fulfilment’, while only 6% were driven by a desire to teach in a university. A quarter hoped the qualification would improve their art or creative work, pointing to the recent popularity of practice based PhDs in areas like fine art and drama.

Information provided by the Higher Education Statistics Agency affirms this widening of demand. Between 2005 and 2009 the amount of doctorates awarded in creative arts almost doubled. Between 2009 and 2012 around 15% of all doctorates completed each year across the entire creative sector were awarded to drama students.

Naturally we should be proud that demand for advanced drama education is at an all time high, but as funding becomes scarcer, this boom cannot be sustained. 80% of the humanities PhDs that I surveyed said they would not be able to complete their study without external grant support, suggesting that the PhD may no longer be the appropriate qualification for those who wish to expand their creative research skills without breaking the bank.

Speaking as a recent masters graduate who has a place to begin a PhD in Drama later this year, the question of whether to self fund my study is daunting, especially as becoming the head of a university department is not my primary career goal. If my ambition was to practice as a theatre director, I might follow the advice given to American academics and consider studying for a two year MFA at a UK institution like Birkbeck. This used to be a cheaper option than the doctorate until the course lost some of its core-funding subsidy last year.

In a changing climate we need to have versatile higher education opportunities that train theatre professionals to be experimental, critical and historically aware. I believe that the doctorate in theatre has a cultural value that extends far beyond its traditional purpose of educating university staff. However, if it becomes an educational opportunity that is only accessible to those who afford it, I might consider joining our American counterparts in calling for its abolition.

Things learned during my first experiences of teaching